“This has been a very difficult time for our state,” Haley said. “We have stared evil in the eye. … Our state is grieving, but we are also coming together.”

“Today, we are here to say it is time to move the flag from the Capitol grounds,” said Haley, surrounded by top leaders including U.S. Senators Lindsey Graham and Tim Scott, both Republicans like the governor. The other politicians broke out in cheers during the announcement.

The decision follows days of protests inside the state and growing pressure on Republican leaders to back away from the flag.  Roof, 21, is being held on nine murder charges in connection with the shooting last Wednesday. Pictures of Roof have surfaced showing the high school dropout with the flag.

Though she sharply condemned the alleged shooter, Haley noted that the flag represents many positive things for people in her state.  “The hate-filled murderer has a sick and twisted view of the flag,” she said, adding, “we have changed through the times and we will continue to do so, but that doesn’t mean we forget our history.”

In calling for the removal of the Confederate flag from state grounds, Haley said: “My hope is that moving a symbol that divides we can move forward and honor the nine blessed souls who are in heaven.” 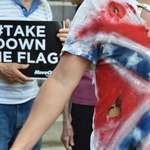 The governor said the Confederate flag could continue to fly on private property, but called on the Legislature to change an existing law that allows the battle flag on Statehouse grounds. The Legislature is coming back for a special session on the budget on Tuesday, but the timing on the flag issue is unclear.

Religious and political leaders including Charleston Mayor Joseph P. Riley Jr. said earlier Monday that they would push for the flag’s removal when the Legislature returns.  Riley has led protest marches against the flag and has called for its removal from state grounds before.

“The time has come for the Confederate battle flag to move from a public position in front of the state Capitol to a place of history,” Riley said at a televised news conference. The flag “was appropriated years and years ago as a symbol of hate,” Riley said, and should be moved to a museum.

The Rev. Nelson B. Rivers III of the National Action Network said the flag should be removed before the body of state Sen. Clementa Pinckney, who was killed in the attack, lies in state on Wednesday. Pinckney was also pastor of Emanuel AME.

Republicans, who control South Carolina’s state Legislature, have rebuffed many previous calls to remove the flag, which dates from the Civil War. For civil rights activists and many others, the flag is a racist symbol of the state’s slave past.  The flag has also been adopted by some white supremacist groups in modern times.

Defenders, including the Sons of Confederate Veterans, a social and political group in the South, insist the flag is a symbol of the state’s past and no longer carries the racist meaning.  “There is absolutely no link between the Charleston massacre and the Confederate Memorial Banner. Don’t try to create one,” stated Leland Summers, South Carolina commander of the Sons of Confederate Veterans. He said the group would fight any plan to take down the battle banner.

While successfully running for her second term in 2014, Haley defended the Confederate flag’s presence on South Carolina’s statehouse grounds. Her Democratic challenger Vincent Sheheen called for the flag’s removal.  “I think the people of South Carolina are tired of having an image across America that’s not truly who we are,” Sheheen said during a debate, adding that everyone should “rally together under a flag that unites us all, the American flag, that looks toward the future and not the past.”

Haley responded that the flag was a “sensitive issue” but she rejected the idea of removing it.  “What I can tell you is over the last three and a half years, I spent a lot of my days on the phones with CEOs and recruiting jobs to this state,” Haley said. “I can honestly say I have not had one conversation with a single CEO about the Confederate flag.”

Conceding that South Carolina had suffered an image problem in the past, Haley insisted that the state had moved beyond the past.  “But we really kind of fixed all that when you elected the first Indian American female governor,” Haley said of herself. “When we appointed the first African American U.S. senator, that sent a huge message.”

The issue took on a new force with the shooting.  Last week, Haley said she believed that Roof should get the death penalty if convicted. She noted her own support for keeping the Confederate flag but added: “I think the state will start talking about that again, and we’ll see where it goes.”

Over the weekend, hundreds of protesters in the state marched to protest the flag’s placement in front of the Capitol.

NAACP President Cornell Brooks has also called for the removal of the flag, which was embraced by Roof in photographs that were posted online and became public in recent days.  “That symbol has to come down,” Brooks said last week, speaking at a televised news conference in Charleston. “That symbol must be removed from our state Capitol.”

Republican state Rep. Doug Brannon announced last week that he will introduce a bill to remove the flag when the Legislature convenes again.  “The switch that flipped was the death of my friend Sen. Pinckney. … I’ve been in the House five years. I should have filed that bill five years ago. But the time is now, I can’t let my friend the senator’s death go without fundamental change in South Carolina,” Brannon said Monday.

On Saturday night, a Confederate memorial in Charleston was spray-painted with the words “Black Lives Matter,” the slogan that has picked up steam after a year of high-profile African-American deaths at the hands of white officers. Protesters have marched across the nation over deaths in Ferguson, Mo., Staten Island, N.Y., Cleveland and the April shooting of a fleeing, unarmed black man in North Charleston.

In recent days, demonstrators in South Carolina have also publicly burned the Confederate flag, seen by many as a symbol of white racism. “It is a reminder, and more so an insult to the very soul of African Americans,” said Dot Scott, president of the Charleston NAACP chapter. “We should not have to continue to be forced to somehow revere the flag,” Scott said.

But to others, the flag represents the sacrifices made during the Civil War.  “We want to remember those men. They are family members, there are pictures on our walls, their names are in our Bibles. They’re part of us, their DNA is in us,” Randy Burbage of the Sons of Confederate Veterans told CBS News.  “The flag didn’t have anything to do with why [shooting suspect Roof] did what he did.”

This isn’t the first time the flag has sparked outrage. In 2000, protests led to a compromise: The flag was removed from the Capitol dome and placed near a Confederate memorial out front. A monument to African Americans was added.

“If we are going to do anything about it, it has to be now,” said Boyd Brown, a former state representative who spoke at an anti-flag rally that attracted about 1,500 people last weekend. “You’ve got to keep this going. It’s not just going to be hashtags.”