After a multi-year battle with oral cancer, MLB First-Ballot Hall Of Famer Tony Gwynn passed away recently. He is mourned by everyone in San Diego from the mayor on down and by all of Major League Baseball.  No one will debate the talent that Tony Gwynn’s amazing career displayed. But what few people know is just how thoroughly superlative his aptitude for baseball was.

Back when relief pitching was more of an aberration than the norm and drug testing was non-existing, Gwynn’s numbers would have been impressive. But you add these factors in and it starts to paint the portrait of wonder that was Gwynn’s outstanding career.

So let me grab that paint brush and show you just how beautiful his genius for baseball was.

Tony Gwynn had the highest batting average of every player in the Major Leagues in eight out his twenty seasons of professional baseball. He tied for second all time in the number of batting titles he’d earned. The guy ahead of him is Ty Cobb whose career ended in 1928. He’s tied with Honus Wagner whose career ended in 1917. And he’s the only one to have had near as many whose career stretched into the 2000’s.

Tony Gwynn retired in 2001. At that time, his career batting average was .338. There are 30 men to have finished their careers at an average of .330 or higher. Tony Gwynn is the only one whose career ended after 1963. He’s also one of the few to have faced consistent, talented relief pitching.

I think you’re starting to understand how in this Modern Era of baseball, Tony Gwynn was a monster at the plate.

A players strike ended the 1994 season while Tony Gwynn was batting .394 and charging towards .400. Hitting .400 over an entire season is the equivalent of hitting 65% of your 3-point in the NBA. The number is so insane there’s a reason no one has done it since Ted Williams in 1941.

4. Top 10 for highest Hall Of Fame induction rates ever

The MLB decides who goes into the Hall Of Fame by giving ballots to sportswriters and other affiliated media. When Gwynn’s name came up, he got in with 97.4% of the vote. He’s 7th overall with only Cal Ripken being the other post-90’s top-10 vote getter, ever.

At 15 All-Star selections, Tony Gwynn is tied, again, with Cal Ripken for having the most in a career that stretched into the 2000’s. Cal Ripken had 19, but that doesn’t take away from Gwynn’s accomplishment in the least. You know what did? The fact that his team sucked. As a matter of fact…

6. All twenty seasons in one city 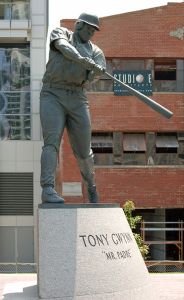 Tony Gwynn was San Diego before LaDanian was even born. Impressive considering the fact that the San Diego Padres were a perennial loser. The closest they game to a championship were two National League Pennants, both earned while Gwynn was there. In fact, they struggled to finish above .500 for most of the Gwynn’s tenure there. Still yet, he stayed and flourished. If ever there was an MLB award for market loyalty, it should be named after Tony Gwynn.

article by Span via urbandaily.com

2 thoughts on “R.I.P. MLB Star Tony Gwynn: Six Things He Did Better Than Anyone Else In Modern Baseball”