Virginia Commonwealth University in Richmond has more than 175,000 volumes in its Comic Arts Collection, including more than 125,000 comic books. The university recently acquired a rare copy of All-Negro Comics No. 1, the first comic book written and drawn solely by African American writers and artists.

The 48-page comic book was published in 1947 and features characters such as police detective Ace Harlem and Lion Man, a college-educated scientist and superhero. All-Negro Comics No. 1 was published by Philadelphia newspaperman Orrin C. Evans.

A letter from the publisher in All-Negro Comics No. 1 reads: “Dear Readers: This is the first issue of All-Negro Comics, jam-packed with fast action, African adventure, good clean humor and fantasy. Every brush stroke and pen line in the drawings on these pages are by Negro artists. And each drawing is an original: that is, none has been published ANYWHERE before. This publication is another milestone in the splendid history of Negro journalism. All-Negro Comics will not only give Negro artists an opportunity gainfully to use their talents, but it will glorify Negro historical achievements.”

It was the first and only published comic in the series.

The nonagenarian, who’s been a member of the National Park Service since she was 85, says she’s not sure that she ever really wanted to be a park ranger, but there’s no way she’s stopping now.

“I still love this uniform. Partly because there’s a silent message to every little girl of color that I pass on the street or in an elevator or on an escalator…that there’s a career choice she may have never thought of,” Soskin said in a recent interview on The Today Show.

Starting her historic career as a file clerk for a segregated union auxiliary in 1942, Soskin then moved to a white neighborhood after World War II, where she received death threats for attempting to build a home there.

Eventually, she found her home among the tons of visitors at Riveter WWII Home Front National Historical Park in Richmond, Calif., where she’s been since 2003.

A walking time capsule, Soskin has made a great joy out of recalling her life to anyone who is interested as she serves as tour guide for the park exhibit “Untold Stories and Lost Conversations,” about the history of wartime women laborers.

She also shares her personal stories as both a political activist and a Black woman in the workforce.

‘Since I’m working from memory, my work tends to be ‘in the moment’ and depends upon my ability to respond to questions out of a well that seems bottomless at times,” she said.

And she’s not planning on retiring any time soon. She clocks in five days a week and says, “And as long as that’s true, and as long as I’m developing new questions, then I’m going to go on living it.”

Sonya Clark, chair of the Department of Craft and Material studies at Virginia Commonwealth University in Richmond, shared the first prize at ArtPrize, an international competition held annually in Grand Rapids, Michigan. She will split the $200,000 first place cash award. 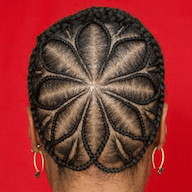 Clark enlisted 12 hairstylists to craft her head into a work of art for the judges consideration.

Clark is a native of Washington, D.C. Both of her parents are from the Caribbean. She is a graduate of Amherst College in Massachusetts. She earned a bachelor of fine arts degree at the Art Institute of Chicago and a master of fine arts degree from the Cranbrook Academy of Art in Bloomfield Hills, Michigan. Before joining the faculty at Virginia Commonwealth University, Clark was the Baldwin-Bascom Professor of Creative Arts at the University of Wisconsin-Madison.

RICHMOND, Va. (AP) — “Twelve Years a Slave” actress Lupita Nyong’o is lending her star power to the opposition to a minor league baseball stadium in what was once the center of Richmond’s thriving slave-trading center.

Nyong’o has been posting anti-stadium opinions on social media to her millions of followers, and has personally appealed to Mayor Dwight C. Jones to withdraw support of the stadium that is the centerpiece of an economic development project.

“Evidence of America’s slave history simply must be preserved, as the legacy of slavery affects all American people,” she wrote in a letter dated Oct. 19 to Jones.

In response, Jones invited Nyong’o to visit the former capital of the Confederacy to see Shockoe Bottom and plans to preserve its slave-trading past.

“Our plans show where we want to invest in that history and lift that history up for future generations to learn from,” Jones wrote.

The stadium-centered project is proposed for Shockoe Bottom, the city’s oldest neighborhood and once the bustling center of the slave-trade. By some estimates, more 300,000 men, women and children were jailed, bought and sold in the Bottom and shipped throughout the Southern states in the decades leading to the Civil War.

The stadium proposal has unleashed pent-up frustration among those who believe the city has literally buried that shameful chapter of its history. The area is now home to nightclubs, restaurants, former tobacco warehouses transformed into townhouses and parking lots.

Nyong’o has a “12 Years a Slave” connection to the neighborhood. The celebrated film depicts the life of Solomon Northrup, who is kidnapped and sold into slavery. He is initially held in a Shockoe Bottom jail where slaves were chained before they were sold to growers in the Deep South.

END_OF_DOCUMENT_TOKEN_TO_BE_REPLACED

RICHMOND – The story of education for African Americans and women in Virginia factors into five of the sixteen sites the Department of Historic Resources recently listed in the Virginia Landmarks Register, the state’s official list of historically important places. The sites include a Farmville church, two Tidewater schools, a house in Falls Church, and a building at the University of Richmond.

The First Baptist Church in Farmville, founded 1867, emerged as a center for the local black community under the leadership of its pastor, the Reverend L. Francis Griffin, when it sought to desegregate Prince Edward County’s public schools during the 1950s and 1960s. Within weeks of an April 1951 student strike at the all-black Robert Russa Moton High School, Griffin successfully led efforts at the church to get youth, parents, and community leaders to support an important lawsuit of the NAACP (National Association for the Advancement of Colored People).

END_OF_DOCUMENT_TOKEN_TO_BE_REPLACED

RICHMOND — After spending 27 years in prison for rapes and attacks prosecutors now say he did not commit, Thomas Haynesworth started a new life as a free man Monday.

At his mother’s cozy bungalow, where a spare bedroom has always waited for him, Haynesworth ate the Chinese takeout he had been craving — chicken fried rice for lunch. For the first time in his life, he placed a call on a cellphone. Two nieces he had just met crawled into his lap as he relaxed on a recliner in the living room.

It was his 46th birthday, and he was finally home.

“I’m just going to sit here and relax and spend time with my mother,” Haynesworth said.

Haynesworth was an 18-year-old high school dropout when was arrested as he walked to the market to buy sweet potatoes and bread for Sunday dinner. He told police they had the wrong man.

Now, nearly three decades later, Virginia Attorney General Ken T. Cuccinelli II and two prosecutors say they believe he was telling the truth. DNA and other evidence, they say, point to another attacker.

Haynesworth has his freedom, but he is still fighting to clear his name. He was released after Gov. Robert F. Mc­Don­nell (R) asked the parole board to review his case. The state of Virginia is supporting Haynesworth’s bid to have the Virginia Court of Appeals issue a “Writ of Actual Innocence.”

“I believe in Mr. Haynesworth’s innocence, and I will continue to work toward a complete vindication,” Cuccinelli said in a written statement.

Haynesworth said he will continue fighting for exoneration. He thinks the court “will see the truth,” he said.

But Monday was about celebrating and starting anew.

About 11:20 a.m., Haynesworth, wearing khaki pants and a button-down shirt, walked out of the Greensville Correctional Center in Jarratt carrying his television and a single garbage bag that held the rest of his belongings.

Haynesworth has never googled, used an ATM or traveled on an airplane. He doesn’t have a driver’s license. During nearly three decades behind bars, he was told when to eat, exercise and go to bed. He said he’s ready to catch up with a world he knows only from television and books.

But for starters, he craves simple things. He wants to sit on a porch, reconnect with old friends and enjoy some of his mother’s fried trout.

“It’s been a long journey,” Haynesworth said. “I just want to reflect and sit down and talk to my momma and eat a meal with her.”

Haynesworth was arrested on a February afternoon in 1984 when his mother sent him out to buy groceries. A woman who had been attacked days earlier saw Haynesworth and told a police officer he was the man.

Haynesworth, who had no criminal record, maintained from the start that he was innocent. But five women ultimately identified him as their attacker. He was convicted in three attacks and acquitted in one; one case was dropped.

In 2005, in the wake of the exonerations of five other wrongly convicted men, then-Virginia governor Mark R. Warner (D) ordered a sweeping review of thousands of criminal cases from 1973 through 1988. Haynesworth’s was among them.

Using technology that wasn’t available in the 1980s, authorities tested DNA collected from a January 1984 rape for which Haynesworth was convicted. The results cleared him and implicated a convicted rapist named Leon Davis.

The Mid-Atlantic Innocence Project took on Haynesworth’s case. DNA testing exonerated Haynesworth in a second rape in which he had been a suspect. Again, Davis was implicated.

Davis lived in the same neighborhood as Haynesworth. They resembled each other and have the same blood type.

Davis, who is jailed on other charges, has declined to be interviewed.

Haynesworth also was convicted in two attacks for which there is no genetic evidence. Prosecutors who have reexamined the cases are convinced he was wrongly convicted of those crimes, too.

Haynesworth said guards at the prison woke him up about 1 a.m. Monday to tell him he soon would be released. The other inmates gave him a birthday card that he brought home.

Hours later he was walking outside, hugging his mother and sisters. News photographers shot photos and reporters fired questions at him.

“Back in the hands of the people that love him,” a nephew said.

“I always believed this day would come,” Haynesworth said. “I didn’t think it would take 27 years.”

At home, he checked out his new bedroom and decided it would need some of his own touches. His mother’s dog, Stud, snapped at him. And he settled back in the easy chair as his mother prepared to whip up a dinner of scalloped potatoes, string beans and her son’s favorite trout.

“When we’re here tonight and it’s just the two of us, it will sink in,” she said.