According to via jbhe.com, the state of Maryland approved a new scholarship program in memory of slain Bowie State University student, 2nd Lt. Richard Collins III. In May 2017, Collins was fatally stabbed on the University of Maryland, College Park campus just days before he was scheduled to graduate from Bowie State. Police classified the murder as a hate crime because the attacker was a White man who allegedly went after Collins because he was African American.

In an effort to honor Collins legacy, Maryland Governor Larry Hogan approved legislation to establish the 2nd Lt. Richard W. Collins III Leadership with Honor Scholarship, which will be funded by the state with $1 million annually. Recipients must be eligible for in-state tuition, a member of a Reserve Officer Training Corps, part of an underrepresented group in the ROTC, and must attend a historically black college or university.

article by Carrie Wells via baltimoresun.com

Morgan State University was named a National Treasure by the National Trust for Historic Preservation on Tuesday, a designation given to only one other historically black college in the country.

The designation will mean Morgan and the National Trust will partner to develop a road map for preserving the university’s historic buildings, which mostly are a mix of Collegiate Revival and Brutalist architectural styles.

That road map will later be used as a template for preserving historic buildings on historically black college campuses across the country, said Dale Green, a professor of architecture and historic preservation at Morgan who is working with the National Trust.

“They have significant rich legacies that most people are unaware of,” Green said. “They’re more than black schools. … They are the only institutions that never barred other races. They very much reflect the American story.” END_OF_DOCUMENT_TOKEN_TO_BE_REPLACED

Morgan State University, the historically Black educational institution in Baltimore, received a $5 million gift from Calvin E. Tyler Jr. and his wife Tina. Tyler is a retired senior executive of United Parcel Service (UPS). The donation will provide need-based scholarships for students from the City of Baltimore. The gift is the largest in Morgan State’s history. The university believes that the $5 million donation is the fifth largest gift by individuals to any HBCU in the nation.

David Wilson, president of Morgan State University, stated that “this incredibly generous donation from the Tylers will provide many talented, hard-working students with a higher education they may not otherwise have achieved. But more than that, it will help ensure the success of Morgan’s mission and benefit the youth of Baltimore City, at this particularly challenging time and far into the future.”

Tyler entered Morgan State University in 1961 but had to drop out in 1963 because he could no longer afford to attend college. He took a job at UPS in 1964 and worked at the company until 1998, retiring as senior vice president of operations.

Education Week recently published the Rick Hess Straight Up Edu-Scholar Public Influence Rankings. The rankings list the 200 university-based education scholars who had the biggest influence on the nation’s education discourse last year. The scholars are ranked in eight categories including Google Scholar ratings, mentions in major newspapers, books published and their rankings on Amazon.com, Twitter scores, and mentions in the Congressional Record. The rankings are calculated by scholars at the American Enterprise Institute.

Three of the top 10 influential educators are African Americans, including the highest ranked education scholar in the nation.

Leading the list of the most influential education scholars is Linda Darling-Hammond is the Charles E. Ducommun Professor of Education Emerita at Stanford University where she is faculty director of the Stanford Center for Opportunity Policy in Education. She is a former president of the American Educational Research Association. Her most recent books are Getting Teacher Evaluation Right: What Really Matters for Effectiveness and Improvement (Teachers College Press, 2013) and Beyond the Bubble Test: How Performance Assessments Support 21st Century Learning (Jossey-Bass, 2014). Dr. Darling Hammond is a magna cum laude graduate of Yale University and hold a doctorate in urban education from Temple University in Philadelphia.

Gloria Ladson-Billings ranked fifth among most influential scholars in education. She holds the Kellner Family Chair in Urban Education at the University of Wisconsin-Madison. Professor Ladson-Billings is a past president of the American Educational Research Association. She is a graduate of Morgan State University in Baltimore and holds a master’s degree from the University of Washington and a doctorate from Stanford University. Dr. Ladson-Billings is the author of Beyond the Big House: African American Educators on Teacher Education (Teachers College Press, 2005) and The Dreamkeepers: Successful Teachers of African American Children (Jossey-Bass, 2005).

Brainpower from America’s Historically Black Colleges and Universities (HBCUs) will be on display at the 25th annual Honda Campus All-Star Challenge (HCASC) National Championship Tournament. Hundreds of HBCU students have spent the past year diligently preparing to compete in the final round of this unique academic tournament, April 12-16, 2014, on the campus of American Honda Motor Co., Inc., in Torrance, California.

This year’s road to the championship began in the fall of 2013, with 76 HBCUs vying for the final 48 slots. Through countless hours of study, drills and practice, elite teams emerged, knowledgeable and ready to take on the competition. Their goal is to beat Morgan State University, the reigning national champions with two consecutive titles, while Morgan State will be seeking a threepeat.

The competitors will be split into eight divisions and will compete in a modified round-robin format. The top two teams from each division will advance to the “Sweet 16” and will compete in a single elimination playoff. The final two teams that emerge from the playoffs will compete for the title of National Champions and the grand prize of $50,000. The grand prize, along with the other institutional grants, will support academic activities at the participating HBCUs.

END_OF_DOCUMENT_TOKEN_TO_BE_REPLACED

Last year may have been the year of the historically black hack-a-thon. Several of the nations’ most prominent black colleges welcomed students of varying majors and interests to a whirlwind experience of innovation, entrepreneurial spirit and networking.  Almost makes you wish there was an app for that, but that’s HBCU Hack-a-thons are all about; taking individuals with little-to-no tech or coding experience and pairing their creativity with tech savvy developers and marketers to make a new generation of black entrepreneurs in emerging tech markets.

Morehouse, Spelman, Clark Atlanta, Howard and Morgan State participated in the 2013 HBCU Hack-a-thon experience. Students compete for prizes, exposure, and for some, their first visions of owning their own company in a field in which they never imagined working.

“It sparks students from across all kinds of disciplines to come together to develop an idea that can be brought to the marketplace,” says Omar Muhammad, Director of the Entrepreneurial Development and Assistance Center of the Earl G. Graves School of Business and Management at Morgan State University. “They get hands on experience with working groups, and understanding what it means to start a business. The individuals who come in as entrepreneurs really help the students to learn how to move their businesses forward.”

Muhammad says the nature of hack-a-thons inspires collaboration, and melds ideas from different backgrounds, industries and social constructs to bring out the essence of innovation. The movement was started by the Black Founders, a group of working black tech professionals who wanted to spur more African-American ownership in tech industries.  One of the Founders and University of Maryland Eastern Shore alumna, Hadiyah Mujhid, told Black Enterprise Magazine in 2013 about the importance of the hack-a-thon effort on HBCU campuses.

END_OF_DOCUMENT_TOKEN_TO_BE_REPLACED

A college education is viewed one of the essential stepping stones to a fulfilling career – but its cost traditionally does not come cheap.  In particular, the tuition of some of the nation’s many historically black colleges and universities range across the board but the rewards of a college degree often outweigh the costs.  While tuition costs and school population sizes are strong determining factors when considering which school to attend, one website, HBCU Lifestyle, has listed which HBCU graduates would earn the most in salary after earning college degrees.

Here are the top 10 HBCU’s by starting average salary:

article by Lilly Workneh via thegrio.com

The Historically Black University explains their mission on the site:

Today, the mission of Morgan State University’s School of Global Journalism and Communication is to give voice to a broader group of people – people who struggle to contribute to the public discourse that shapes this nation and the world. We serve this cause with innovative teaching, cutting edge research, and exemplary service to Maryland, our nation, and the world.

Our goal is add to the diversity of thoughts, opinions and beliefs by offering students from a wide range of backgrounds the liberal arts education and skills training they need to effectively communicate ideas – to plead their own causes, or to accurately tell the stories of others.

In our global school, students travel the world in their classes and assignments, without leaving the campus. They also see the world through their interactions with our partner programs at universities in distant lands – and they are offered opportunities to travel abroad in our Worldwide Learning Lab program.

The great advances in technology have turned the world into a global village. The goal of our school is to make our graduates effective communicators in every way – and every corner of this village.

The school officially launches this fall and it will be commenced with a special ceremony on August 27, 2014. 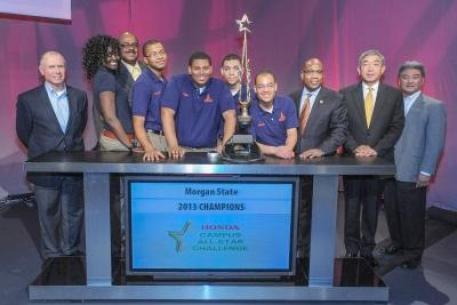 The team from Morgan State University celebrates on stage after winning their second consecutive title at the 2013 Honda Campus All-Star Challenge.

In 1975 the Himalayan kingdom of Sikkim joined what very large neighbor to its south? Correct Answer: India

The fast-paced, suspenseful competition tested the students’ abilities to quickly and accurately answer questions on a broad range of topics including world history, science, literature, religion, art, social sciences, popular culture and African-American history and culture. The top two teams from each of the eight competing divisions advanced to the “Sweet 16,” a single-elimination playoff. The final two teams then battled it out for the national title in a best 2-out-of-3 finals.

END_OF_DOCUMENT_TOKEN_TO_BE_REPLACED

It was just a month ago when the board of regents of Morgan State University, the historically Black school in Baltimore, voted not to renew the contract of its president, David Wilson. Wilson had served as president for two years and his three-year contract was set to expire in June of this year.

But then something unusual happened. The board’s decision unleashed a torrent of criticism by the school’s faculty, staff and, most notably, Morgan State’s students, who held protest rallies on behalf of retaining President Wilson.

Since then, the board announced something of a reversal, saying it was reconsidering its initial decision. It agreed to negotiate a new one-year contract covering the period from July 1, 2013 to June 30, 2014. The terms of the one-year deal have yet to be negotiated.