WASHINGTON (AP) — President Barack Obama on Monday called for a more robust national discussion on mental illness, saying the time had come to bring the issue “out of the shadows.”

Speaking at the opening session of a White House conference on mental health, the president said his goal was to let people affected by these issues know they should not suffer in silence.

“Struggling with a mental illness or caring for someone who does can be isolating,” Obama said. “It begins to feel as if, not only are you alone, but that you shouldn’t burden others with the challenge.”

The conference is part of Obama’s response to last year’s shooting massacre at a Connecticut elementary school. While the president emphasized that most people with mental health problems are not violent, he said untreated mental illness can lead to larger tragedies.

There’s been little publicly revealed about the mental health of Sandy Hook shooter Adam Lanza, although it’s been documented that other gunmen involved in mass shootings suffered from mental illness. Federal law bans certain mentally ill people from purchasing firearms, but the background check system is woefully incomplete and Obama is trying to get more mental health records included.

“We can do something about stories like this,” he said. “In many cases, treatment is available and effective.” Top administration officials, along with actors Bradley Cooper and Glenn Close, were among those participating in the White House conference.

The agenda includes discussion of insurance coverage for mental health care and substance abuse, recognizing the signs of mental illness in young people and improved access to services for veterans. The overall goal is reducing the stigma of mental health problems and encouraging those who are struggling to get help.

END_OF_DOCUMENT_TOKEN_TO_BE_REPLACED 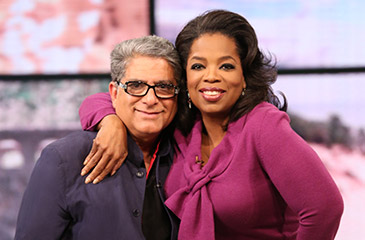 This first “Oprah’s Lifeclass” branded program is designed to introduce users to the benefits of regularly practiced meditation. Interested participants can register now for the three-week course on www.oprah.com/DeepakChopra to join the challenge and receive 21 days of guided meditations from Winfrey and Dr. Chopra.

Over the next three weeks, participants will receive a daily email with a link to access the day’s meditation, as well as an inspiring message and tips for creating a powerful meditation practice.

END_OF_DOCUMENT_TOKEN_TO_BE_REPLACED

LOS ANGELES (CBS) — Los Angeles Lakers forward Ron Artest was honored Tuesday by the Los Angeles County Board of Supervisors for his work in raising awareness of mental health issues.

Supervisor Mark Ridley-Thomas recognized Artest for “his demonstrated courage in helping to erase the stigma
associated with mental health challenges.”

Artest’s goal, he said, is to let kids in particular know that there’s nothing shameful about seeking help when they need it.

Artest has appeared in public service announcements for the county and other organizations and raised $650,000 to support mental health programs by raffling off his 2010 NBA championship ring.

The county’s director of mental health services, Marvin Southard, reinforced Artest’s message Tuesday, saying, “If you get the help, anything is possible.”