by Kenya Downs via huffingtonpost.com

The United States Navy is joining the Marines, Army and Air Force in ending its ban on dreadlocks for female sailors. The naval branch announced the reversal Tuesday in a live broadcast on its Facebook page.

The Navy enlisted a six-person working group to recommend changes to grooming standards, based on feedback from their peers. As part of the decision, ponytails, buns and other styles will also be permissible for women in uniform so long as they don’t interfere with a sailor’s operational or safety needs. Male sailors are still required to keep their hair short.

Petty Officer 1st Class Jacqualynn Leak, a member of the working group, has worn dreadlocks since 2014. She led efforts to reverse the ban and says her fight involved years of research on the cultural and health aspects of wearing locs. She also surveyed dozens of female sailors affected by the ban.

“I wanted to make an argument so compelling that every reason my chain of command could give me for why dreadlocks were banned could easily be rebutted with facts,” she said.

Before, Leak opted to cover her shoulder-length dreadlocks by wearing a wig, which she says became more difficult as her hair grew. Options were even more limited for other female sailors. Some were forced to choose between cutting off their dreadlocks in favor of chemically straightened hair, or facing harsh punishment.

In 2014, Petty Officer 2nd Class Jessica Sims, a hospital corpsman, was honorably discharged for refusing to cut off locs she’d worn in a tight-knit bun for over a decade.

While challenges to military rules on hairstyles aren’t new, controversy surrounding black hair reached a peak around the time of Sims’ discharge. As word spread, revisions to Army grooming regulations were leaked, revealing proposed changes to ban hairstyles common among women of color. The proposed policy, called AR 670-1, would have banned all natural hairstyles, including twists, braids, cornrows and Afros.

Many criticized the regulations as specifically targeting black women. Once it had been made public, the policy faced immediate backlash, culminating in an open letter from the Congressional Black Caucus and an official review ordered by the Pentagon. The decision was ultimately reversed.

But that reversal didn’t include dreadlocks. First Lt. Whennah Andrews of the U.S. Army National Guard has been fighting for servicewomen’s right to wear them ever since. Together with fellow soldiers, Andrews began a campaign to challenge misconceptions many within the military have about dreadlocks’ cleanliness, cultural relevance and ease of use.

Leak enlisted Andrews for guidance when deciding to take on the Navy. Andrews says the Navy’s announcement is the final triumph signaling a victory for military diversity.

“When news broke that the Army lifted the ban on locs, I thought to myself, ‘It’s not a complete win until all of the branches authorize them,’” she said. “The unique challenges African-American servicewomen faced with trying to adhere to grooming policies were universal across the Department of Defense.”

This week’s decision makes the Navy the last branch of the military to drop grooming regulations that prohibit dreadlocks. The Marines first approved locs for women in 2015, and the Air Force announced late last year that dreadlocks would become an approved hairstyle after a review by its uniform board. The Army authorized dreadlocks for women earlier this year after having previously banned them since 2005.

A Brazilian teacher has come up with a unique way to help a schoolgirl who was being bullied because of her hair.

Ana Barbara Ferreira, from Sao Paulo, Brazil, said her student was “sad” after being ridiculed by a boy, who had said her hair was “ugly”. “At that moment, the only thing I could tell her was that she was wonderful and shouldn’t care about what he was saying,” she wrote in a Facebook post that went viral. A bigger show of support came in the following day, when she went to work wearing the same hairstyle as her pupil, much to the girl’s surprise.

“When she saw me, she came running to hug me and say that I was beautiful,” Ms Ferreira said. “I told her: ‘Today I’m beautiful like you!'” She posted a picture on Facebook of her with the pupil – both smiling and with similar hairstyles.The teacher has been widely praised on social media. Her post has been liked by more than 142,000 people and shared 30,000 times.

Ms Ferreira said: “Yesterday, my student told me there was a boy saying that her hair was ugly. She was very sad. At that moment, the only thing I could tell her was that she was wonderful and shouldn’t care about what he was saying.

“Today, I woke up and remembered what happened and decided to wear the same hairstyle she used to wear. When she saw me, she came running to hug me and say that I was beautiful, and I told her: ‘Today I’m beautiful like you!’.”

The University of Cambridge is staging a mayor exhibition exploring the 6,000-year history of the afro comb and the politics of black hair.  The fascinating display charts the inception of the comb in Ancient Egypt through to its ascendancy as a political emblem post-1960s.

“What we know from the early hair combs is they were connected to status, group affiliation, cultural and religious beliefs,” says curator Sally-Ann Ashton. “In more recent times, the ‘black fist’ comb that references the black power salute has wider political connotations.”

The material is being showcased at 2 university sites: The Fitzwilliam Museum, and alongside life-size installations created by artist Dr. Michael McMillan at the Museum of Archaeology and Anthropology (MAA).  Items on display at Fitzwilliam include hundreds of combs from pre-dynastic Egypt to contemporary picks. Some interesting artifacts include a 5,500-year-old comb from Southern Egypt and the original black fist comb, which was patented in 1976 in America.

The idea behind the exhibition was to take a fresh look at Egyptology within the parameters Africa in all its diversity, rich heritage, and culture, says Ashton. Interestingly, she says the earliest combs in the collection are from Egypt and this alongside her scholarly research has left her with no doubt that ancient Egyptians were racially and culturally black African.

“People do not want to admit or believe that these early civilizations were non-European but they were,” says Ashton.  Associated material includes paintings, sculpture and images showing the variety and complexity of hair styles found in Africa and on the Diaspora.

END_OF_DOCUMENT_TOKEN_TO_BE_REPLACED

In 2005, Devin Robinson was threatened with a golf club by a store owner while shopping in the owner’s beauty supply store. Out of anger, two months later Robinson had his own store. Eighteen months later he had two additional locations. 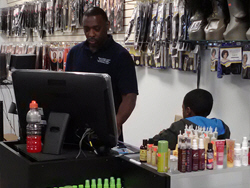 Another Black-owned beauty supply store opens. In this $15 billion industry, 96 percent of the revenues come out of Black pockets, but only 3 percent of the stores are owned by Blacks.

In 2007, he self-published “Taking it Back: How to Become a Successful Beauty Supply Store Owner” and launched Taking it Back University to train others how to be successful in beauty supply ownership too. In 2008 he was featured in Ebony magazine and appeared in the documentary, “Black Hair.” In 2009 Devin Robinson led a national boycott against non-Black-owned beauty supply stores. Since then, he has rebranded Taking it Back University into Beauty Supply Institute.

By the end of 2012, the revenues of stores Beauty Supply Institute is responsible for opening topped $10 million. When asked about this accomplishment, Robinson said: “Putting these revenues back into the hands of Blacks and in urban communities is severely important to me. For the past six years when aspiring entrepreneurs ask how to open a beauty supply store or how to become a beauty supply store owner, I wanted us to have every single answer for them. I am very pleased with my team. In this industry, we have more answers now than any question a client can ask us. I view the problems in this industry as an economic hate crime against Blacks, thus making entrepreneurship the 21st century civil rights issue.”

END_OF_DOCUMENT_TOKEN_TO_BE_REPLACED

To say the least, black hair seems to have remained one of the most debated topics this year amongst women of color. It has remained a topic of cultural anguish, with tales of tampered coils and unruly strands ruling online forums and video blogs. The essence of black hair has rarely been adored simply for its beauty and uniqueness. One Black woman, however, is seeking to bend the conversation by doing just that through her artwork.

Andrea Pippins, a Baltimore-based graphic designer,released a four-poster series of prints titled “Crowns of Color” last week as answer for her need of diverse affordable art a light-hearted celebration of black women’s hair. In an interview with Colorlines Magazine, Pippins describes how she hopes to steer the black hair conversation in a different direction:

“With all due respect, I am personally tired of the natural hair conversation in regards to one having to defend the choice to go natural, encouraging someone to go natural, or speaking to it from a place of political debate.”

Read the rest of this story on Clutch Magazine.